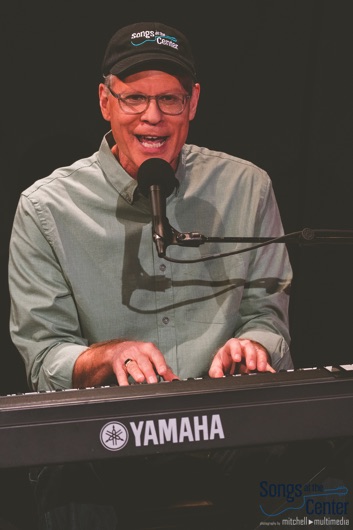 About Songs at the Center:

Songs at the Center, hosted by Eric Gnezda, premiered in January 2015 on Columbus, Ohio's PBS station and now airs on more than 385 PBS stations.  The series features local and nationally touring singer-songwriters playing short sets in front of a live audience at the McConnell Arts Center in Worthington, Ohio, and other select venues, interspersed with interviews.

As its name implies, Songs at the Center focuses on the songwriter, showcasing those who write the songs, or as Gnezda refers to them, “the unsung heroes of the music business.” He maintains that “the heart of the song lies with the songwriter,” who is not necessarily also the recording artist.

Although Gnezda occasionally performs his own songs on the show, his focus is on presenting other artists who he considers worthy of attention. Songs at the Center has featured such notable artists as Suzy Bogguss, Jim Brickman, Bruce Cockburn, Rodney Crowell, Janis Ian, Delbert McClinton, John Oates, Tom Paxton, and Gretchen Peters, among others, as well as a number of lesser-known writers of hit songs recorded by others.

Indeed, Gnezda's desire to introduce some songwriters who may be well known and respected within the music community to a wider audience among the general public was the impetus behind Songs at the Center.

During the show, Gnezda engages in conversation with his guests. “All artists have stories behind their music, and I want to bring out their stories, to get them to share the feelings and experiences that led them to write the songs,” he says.

Says John Oates, a Rock & Roll Hall of Fame inductee (with musical partner Daryl Hall): “Eric has a knack for bringing out the stories behind the songs … and the struggles songwriters go through to write them.”

For his part, Gnezda attributes the series' appeal to authenticity. “It's intimate, powerful musical expression,” he says.

The ballroom in Cincinnati's Omni Netherland Plaza hotel is packed with employees of an international corporation celebrating its centennial anniversary. The cacophony of concurrent conversations that reigned over the room earlier in the evening has been replaced by a hush that is equally pervasive.

Eric Gnezda's lyrics, written in solitude, swirl about the ears of an audience clearly listening. Singing into the microphone, Eric lifts his eyes from his piano keys, and with a disarming gaze, penetrates the audience before him. Seated well within the crowd, you could swear he was looking at you.

The music that springs from the depths of Eric's soul travels a pure and simple path into the hearts of his listeners. In many ways, the road that led Eric to where he is today was also pure and simple.

Both music and writing are passions which took hold of Eric in childhood. Repeatedly selected to sing in school choirs, and for 10 years a drummer in several bands, Eric was also chosen for the lead roles in his high school musicals. From the time he was in grade school, he also enjoyed what he describes as "painting pictures with words."

But it was in his 17th year, while first writing lyrics for some music he created at his piano, that Eric knew he had found his life's purpose: "It was then that I finally brought my two greatest passions together."

Joyous as that pivotal moment was for Eric, during the years preceding it, he had not escaped his share of life's agonies and pains. Three days after Eric's birth, his father was diagnosed with multiple sclerosis, a torturous disease that eventually claimed his life. The intense suffering his dad endured over many years inescapably permeated the Gnezdas’ home life; it also cut into Eric's soul like nothing else since. His song, "Daddy's Wheels," grew out of those experiences. (Continued...)

Award-winning singer-songwriter and host of nationally syndicated TV show Songs at the Center.

Eric Gnezda is an award-winning singer-songwriter and the creator and host of Songs at the Center, a TV series that airs on nearly 400 PBS stations across the U.S. He pens and performs a wide range of songs, both serious and humorous - from inspirational anthems and love songs that touch the heart and soul to country tearjerkers and comedic/satirical numbers. Gnezda accompanies himself on piano.

Eric Gnezda (NEZZ-da) is an award-winning singer-songwriter and the creator and host of Songs at the Center, a TV series that airs on nearly 400 PBS stations across the U.S. He pens and performs a wide range of songs, both serious and humorous - from inspirational anthems and love songs that touch the heart and soul to country tearjerkers and comedic/satirical numbers. Gnezda accompanies himself on the piano.

Based in Columbus, Ohio, Gnezda is a recipient of the Ohioana Citation for Music Composition and was named "Best Satirist of the Year" by Columbus Monthly magazine, which described has as "witty and caustic without being cruel."

On the more serious side, his anthem, "Everyone Wins" has been used nationally to promote the Special Olympics, while "Blossoms of Hope" has been a favorite among cancer survivors.

Gnezda has entertained and inspired with his music and humor at such notable venues as Nashville's Bluebird Cafe, whose singer-songwriters 'in-the-round' format was the inspiration for a similar songwriters' showcase series that he launched at Columbus venue, Natalie's, and that led to the creation of the Songs at the Center TV series.

He has also performed and spoken before hundreds of service groups and charities and was commissioned to write songs for some of them. A Voices of Hope Chorus that Gnezda organized has performed at cancer survivor events across the country.

Gnezda and his musical works have been featured on such broad media as ESPN, Entertainment Tonight and NPR's All Things Considered and Car Talk.

Gnezda earned an MFA in creative writing from the Rainer Writing Workshop at Pacific Lutheran University.

Music and writing have been passions of Gnezda's for most of his life, beginning in childhood.  He sang in school choirs, played lead roles in high school musicals, and, as a teenager, began taking joy in writing lyrics for music that he created at the piano.

At 23, Gnezda began recording spoken radio commentaries for Columbus' NPR station every Friday. About three months into it, he started incorporating satirical songs into his show - one of which landed him on Entertainment Tonight. While still in his 20s, Gnezda was also a columnist for The Columbus Dispatch and a TV personality on PM Magazine.

After leaving radio and the columnist position, he began writing more serious songs. Bouyed by a positive initial response, he added serious songs and stories to his performance repertoire.

"Eric Gnezda's best songs explode in your heart as you listen to them!"

"You have captured the spirit of the Special Olympics in your music and lyrics. I was especially touched by two of the messages your song (Everyone Wins) conveys: we never know whose life we are touching by what we say or do; and the joy we feel when we are giving ourselves to others."